Posted on April 14, 2021 by first person productions
By Marlene Samuels 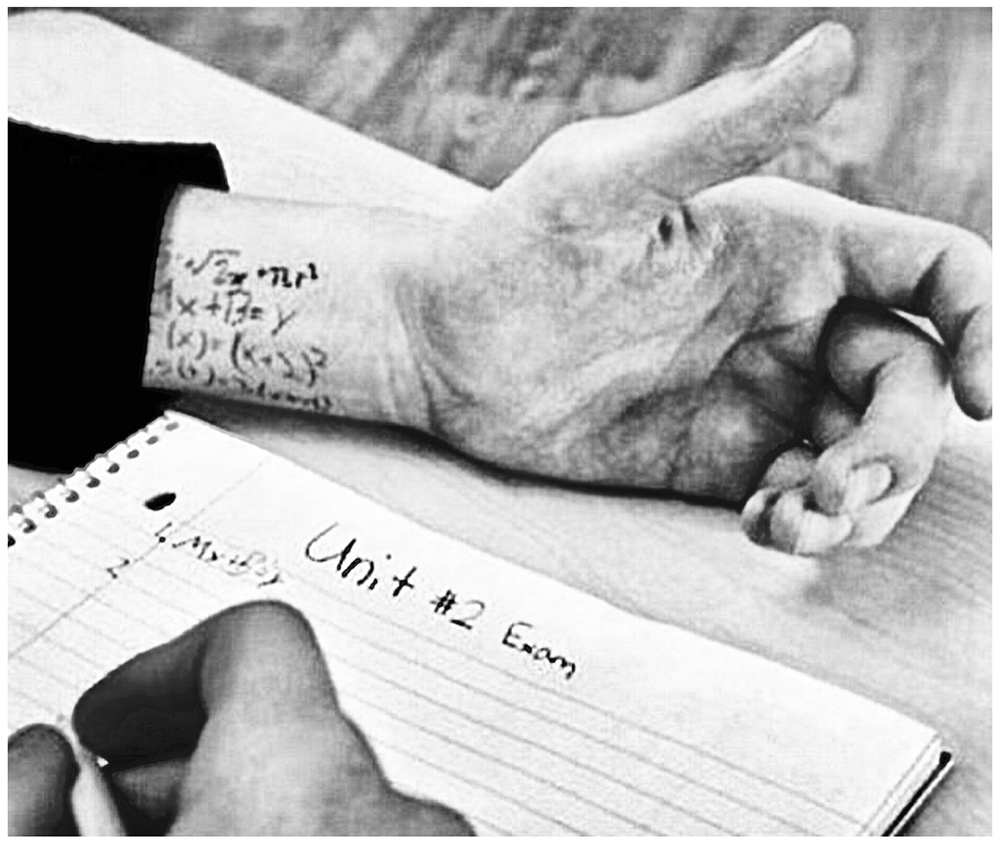 At home, during dinner, I sit next to my father at the kitchen table. I tell him about my cheater classmates, about the ways in which they write on their arms, how much it disturbs me and how much willpower it takes for me not pick up my books and move to a different seat. First, he grimaces. A second later, his face is transformed by the  cynical smile with which I’m more than familiar. When his sleeves are rolled-up, I see his numbers and they, too, look as though they were scribbled on his arm. They appear to be a faded black — more like charcoal gray, and are followed by the geometric symbol of great significance. The symbol, a triangle, is a special code designating him as a Jew,  that triangle representing one-half of the Star of David.

In the decades since he was marked with them, my father’s numbers have seeped into his skin so deeply, they reach down into the very core of his soul. Unlike my cheater-classmates, he was anything but the master of his own skin-scribbles.

“So nu?” he asks me in his Polish-accented English, “Do you think for these boys who do such writing on their skin, they have answers? You know something what I learned?” He asks. “Maybe these boys will pass their algebra quizzes by their cheating, yes?”

I shrug my shoulders, not sure what my response should be and wonder if there is a correct answer to his questions. But my father continues. “What I want to know is if these boys, these cheaters, would be able to solve important problems if their lives depended on this? Ach, maybe but probably not, huh?”

I don’t really understand what he’s asking me, what he might say next, or where he’s headed with his seemingly disjointed comments and questions. One thing of which I am absolutely positive—my father’s talk is a lesson that will be tied to the five numbers tattooed on his right arm. “You know my numbers?” He asks me. His question is rhetorical. “I passed such tests like what those nicht guttnick (no good) cheater boys never in their whole lives would imagine there could be! And you know something else?” He adds, “Still, I know nothing from the answers. Maybe you could say because of this, I’m also a cheater, huh?” He laughs at his last remark, inhaling with an airy little sniff that suggests he’s greatly amused by his own verbal cleverness.

“So, you know I never cheated in math, yes? But you know what else? For sure I cheated at death! Those boys what are in this class of yours? Do you really think that for eine sekunde (one second) their cheating would for them help if they had to pass the staying-alive tests like what I had to pass —every second of every day of every month for those four years when I was in hell?”

What I do come to realize, during our dinner conversation, is that in my next math quiz-day, whatever distress I may experience upon seeing the cheaters’ arms is likely to be replaced by different emotions. Maybe I’ll regard them as fools? Or will I feel pity for them? Because I now realize that their lack of awareness, lack of worldliness, and their naïveté about cheating versus knowing would, under different circumstances, surely be their death sentences.